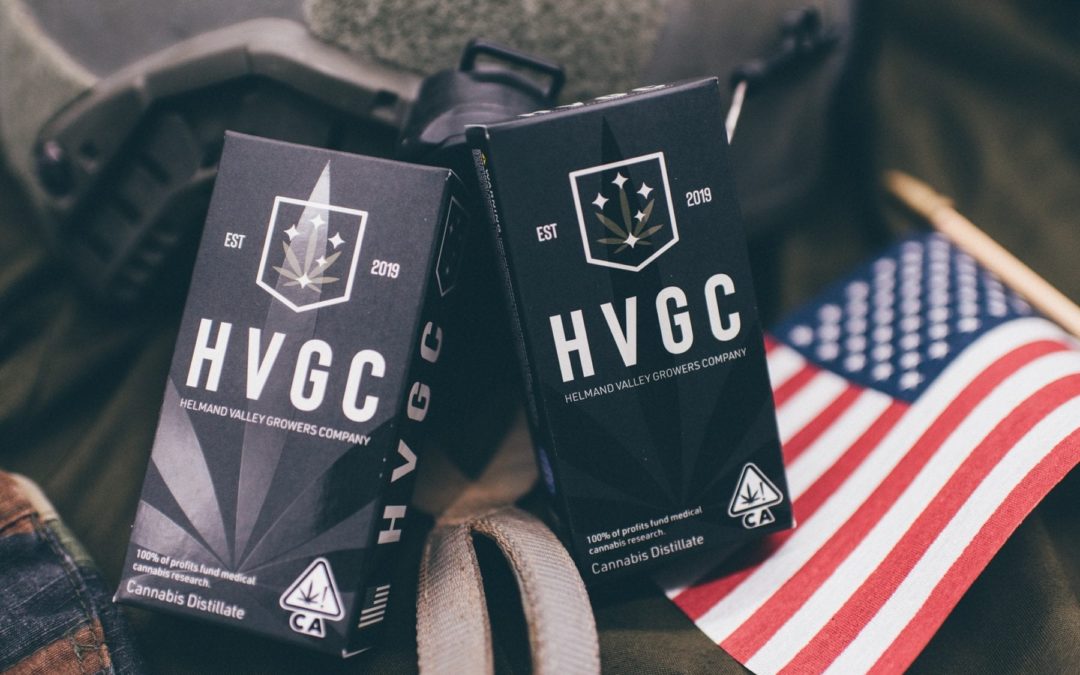 I sat down virtually with Bryan Buckley, CEO of Helmand Valley Growers Company to talk about the San Diego-based vape brand and its mission to uplift disabled veterans through medical cannabis research and advocacy. 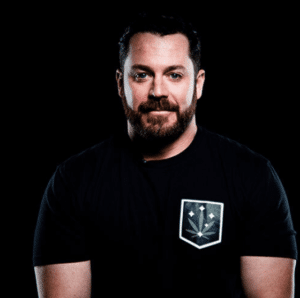 SHELBY: What is Helmand Valley Growers Company, and what kinds of products do you offer?

BRYAN: Helmand Valley Growers Company — we came up with this name from the area that we served in, the Helmand Province, our unit 1st Marine Raider Battalion. When you served there you became part of the Helmand Valley Gun Club and you would put an HVGC tattoo on you. We wanted to keep a military brand to it due to our overall mission of veteran medical cannabis research. So we put HVGC up on a wall and came up with Helmand Valley Growers Company, talked with the guys to make sure everyone was good with it, and they were very supportive and very appreciative of our mission. Currently right now we’ve launched our vape line — we have six distillates, we’re about to add a seventh to it — along with our one-to-one coming out shortly, our live resin, and then we’re also going to be moving into flower here in the next two months so we’ll have some prerolls and regular flower. We hope to be S.K.U.’ed* out by the end of the year. 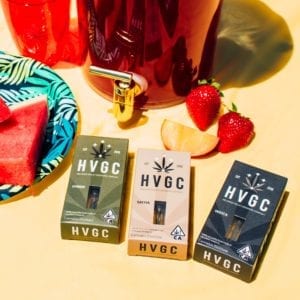 SHELBY: That’s exciting. What is the company’s mission?

BRYAN: Our mission is to go after the symptoms of Post Traumatic Stress by utilizing medical cannabis, so we partnered with a firm called NiaMedic Healthcare and Research out of Israel. We have U.S. doctors in support of our study and we are currently waiting on approval from an institutional review board. Why that is significant, it means that we have been cleared to do human trials using medical cannabis, and it would be one of the first of its kind ever done in this country.

SHELBY: What is your background and how did your experiences — especially in the Marine Raiders — shape your interest in cannabis and influence the decision to start this company of your own?

BRYAN: For me it was really, while you’re in the military you just do not think about cannabis because you can’t use it. We get urine tests, and if you pop for THC, I mean, you’re done. It’s pretty clear-cut. But to me it really started coming into reality a little bit when I started seeing what was going on with the veterans, and the suicide and opiate epidemics. Being a 100% disabled veteran myself, I kind of understand what the V.A. can do within some of their limitations. And let’s be honest, government isn’t the most swift moving machine in the world, so we really started looking at things a little bit differently. And when I started talking to guys who got out who have been using medical cannabis and the benefits it did for them — and then myself starting to use — that’s when I started to think, how can we do something to make it more impactful? I had an opportunity to talk with a couple members of Congress, and that’s what they told us; they’re like, the days of advocacy have kind of hit a culminating point, people are kind of dug in, but if you can provide data and have American doctors backing that that will be a very compelling argument to potentially move this into the V.A. medical system and make medical cannabis federally legal at that point.

SHELBY: Yeah, I know that’s been a big issue especially in light of all the issues around CBD and hemp. So what is Battle Brothers, and how is it related to HVGC?

BRYAN: The Battle Brothers Foundation is our nonprofit organization. We really will never say hey, if you’re a veteran, you use cannabis, everything’s going to be great. It’s more about a customized plan for that individual veteran. So we go through with a three tiered approach: a personal, medical, and economic. The personal side is kind of like a Big Brother/Big Sister. You’re paired up with another Battle Brother, a vet who has transitioned — and they’re there for you if you just want to talk in the middle of the night, whatever it may be because transitioning is a lot more difficult than people would realize. On the medical side, we do V.A. disability claims, so if the veteran didn’t get the disability rating that they deserve, we go back in, we’ll take it over, and we would run through it and get that veteran to the appropriate rating. And it’s massive for not only them but their family as well. We do help out with treatment, so if a veteran is suffering with opiates, alcohol, P.T.S., or all of the above, we do have treatment facilities we can send them to free of charge to just kind of let them take a knee and get back up on their feet. And we are doing medical cannabis research. The third part is economic, where we do job placements so that veteran has that sense of purpose just like they did when they served our country, and hopefully we can avoid them making a mistake that they can’t come back from.

SHELBY: Why do you feel it is necessary to conduct more research on cannabis? What are some of the most prescient issues facing veterans today and how do you believe that can be alleviated by having wider access to cannabis? 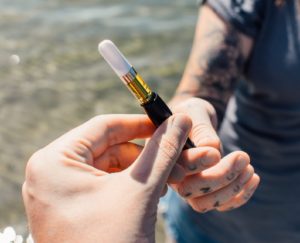 BRYAN: I think it goes with the old saying, numbers don’t lie. Again, like you kind of go the advocacy route — hey this has worked for me, and that’s great, people are going to believe you. But until you actually present them with hard data and say we’ve done the research, it works, what are we waiting on? I think that’s going to be a very big moment for everyone to kind of take that pause. Because we’re seeing it in different countries where they’ve been doing research for numerous years — for example Israel — and they’re showing that it works. I think it provides greater opportunity for veterans where the V.A. doesn’t have to be stuck in what they have with their opiates and saying well, let’s try this or let’s try that. Now you can have something a little bit more efficient; you’re not giving the veteran 13, 14, 15 pills a day. A lot of things might be alleviated from just this plant. And you can do things so they can function during the daytime and even at nighttime. There’s no better medicine than getting someone down and getting some sleep. So we’re seeing too that a little bit higher THC content in veterans puts them down. When they get up to use the restroom or something in the middle of the night they can go right back to sleep and they wake up refreshed and ready to go. I think that’s going to be very big. To me I just think everything our veterans have done for us and — you know, they raise their right hand and they sign a blank check payable on their lives — I think it’s wrong of us not to exhaust every possibility that we have to find the best treatment for those veterans.

SHELBY: It’s so important to be able to bridge that gap between the medical and scientific community and, you know, the people who have been in this industry kind of under the radar for so long. So what are some of the achievements that HVGC has made so far, and on that note, what are some of the obstacles that you’re still working to overcome? 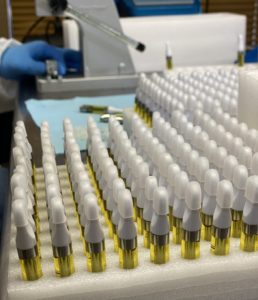 BRYAN: Well, I think one of the things I’m most proud of is the partnership we’ve made with Platinum Vape and working with George and Cody Sadler, who really brought us in from Battle Brothers to help us out through the REACT program. But then when they heard the story about Helmand Valley Growers Company and what we wanted to accomplish, they brought us in and said hey, we’re going to back you guys and let’s get this out to market. Currently we’re in 27 shops in about six months which is pretty good and we’re rapidly expanding. And like I said, we’re adding new S.K.U.s, and we feel like the brand has “took” and people are getting behind the story. I think our biggest accomplishment to date right now is we actually have a study design that’s sitting with an institutional review board as we speak, and we’re literally expecting in the next 48 to 72 hours that we get approval which would be monstrous, and really change the dynamic here of medical cannabis in our country.

SHELBY: What can the average consumer do to help further your cause?

BRYAN: What we do is 100% of our profits goes back to veteran medical cannabis research. And to add on to that last question, this study cost us over $40,000, and it was funded by the cannabis community. So we have not taken a single paycheck yet — we took all the profits and literally threw it right back into the study design and got it on board. And I think that’s the best way people can get out and help us is, you know, buy our products, buy our gear that we have online, anything. Because like I said, we will take 100% of those profits and push that right back into veteran medical cannabis research. And ultimately it’s kind of our call to arms for the entire cannabis community, and if we all come together it’s not just going to benefit vets, it’s going to benefit all the vets in America. 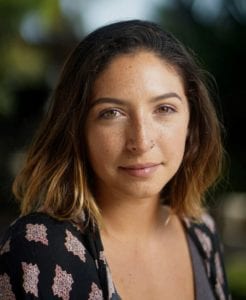 Shelby Huffaker (she/her/hers) is Torrey Holistics’ Lead Cannabis Educator and Sustainability Coordinator. As a passionate advocate for cannabis research, social equity, and sustainability within the industry, she is committed to sharing her findings with the public. Huffaker’s notable achievements include speaking at the San Diego Union Tribune’s Successful Aging Expo and co-organizing the GoodLife Seminar Series, the first cannabis education event to be held at the Del Mar Fairgrounds.